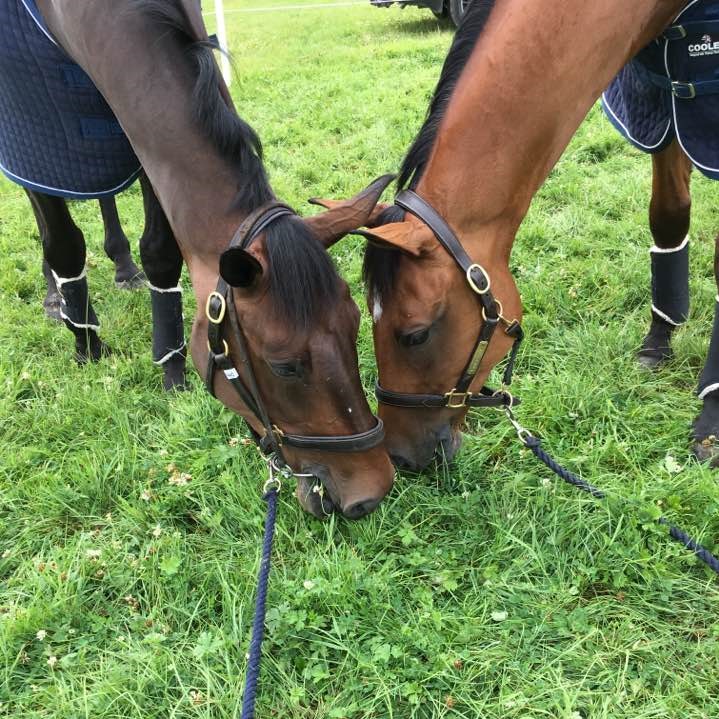 So a week in France with Mr Bass and Cooley Again for the CICO*** … its always special taking these 2 boys together as I have had them both since 4yo’s and they’ve moved up the levels together.

Friday
In the dressage Mr Bass did some lovely work but did NOT appreciate the lying water on arena ? 4 costly mistakes with movements through the puddles so 50.0. Cooley Again did some stunning work but also added some “extra” moves ?? he was feeling far too pleased with himself!! 53.9 in CIC***. {Photo :- Best buddies discussing their disgraceful behaviour in the dressage today ? #cheekyboys #lovethem}

Saturday
Mr Bass is quite simply phenomenal ? skipped round the CIC*** xc clear inside the time to climb up to 10th … ? & Cooley Again was fantastic but unfortunately the rider completely messed up so he has a 20 pens … he has no idea and thinks he’s amazing ?. So proud of how both my boys made the xc feel so effortless.

Sunday
A very unlucky SJ rail for Mr Bass …. his first ever fence down at 3* level but he’s been amazing again ? #lovehim #luckytohavehim ? Cooley Again jumped an immaculate clear in CIC*** … he’s been on such good form this week ? so annoyed with myself for messing up on xc ?

Things didn’t totally go to plan this week but the results don’t show how insanely cool my 2 babies are ? Mr Bass and Cooley Again are both feeling better than ever …. safe to say I get rather excited by these 9yo’s.

Team GB ?? finished 2nd in Nations Cup behind the very experienced French team ? This means Great Britain maintains its lead in the Nation Cup series with 560 points ahead of Germany on 480 points. France now sit in third in the series on 255 points. There are two events in the series to go – Waregem and Boekelo.

☺️ Thankyou to my awesome home team Jodie Owen, Elodie Taylor, Hannah Parfitt, Jimmy Little and Lily Bradstock who are keeping the show on the road whilst we are away.