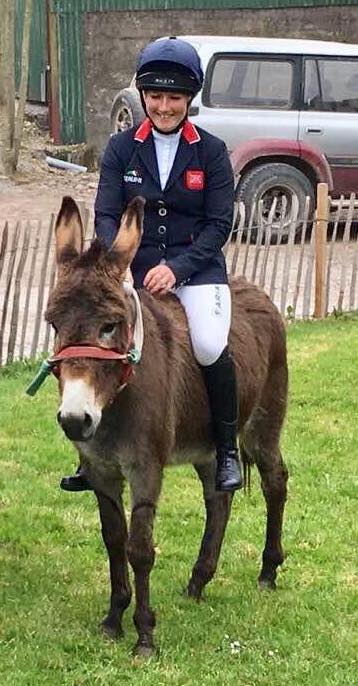 We’re very excited to announce that one of our Ballindenisk donkeys, Orgelav, is having a change of career from racing to dressage!

Laura Collett Eventing bonded with Orgelav when the pair were triumphant in the Ballindenisk donkey derby last year. Laura was impressed by Orgelav’s floating paces and suggested a change in career due to his obvious potential. Orgelav has been based with Laura Collett Eventing for the winter undergoing intensive dressage training. Sadly as Orgelav’s ears are longer than the permitted length under Fédération Equestre Internationale rules he can’t compete in the upcoming Ballindenisk International Horse Trials (19th – 22nd April) however Orgelav will make his dressage debut doing the guinea pig test for the CCI1* at the event.

Speaking of Orgelav’s preparation for the event, Laura Collett said “I am delighted with how Orgelav has transitioned to his new discipline, he is fulfilling the potential I felt when I rode him in the Ballindenisk donkey derby. There is still improvement needed with his lateral work so we have decided to do the CCI* test with him on this occasion. He has so much potential and I really feel he is one to watch for the future so we didn’t want to over face him with the pressure of the CCI3* test yet.”

We can’t wait to have Orgelav back home on Ballindenisk soil and showing off his new donkey dancing skills. Come along to Balllindenisk International Horse Trials running from the 19th – 22nd April to see Orgelav in action!